Batumi - the sea, the sun, beautiful buildings and cars 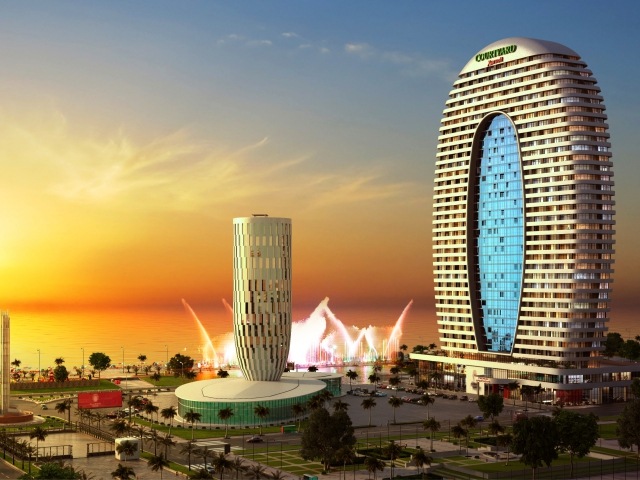 The value of Batumi is not only historical, it is also modern buildings, houses and places where you will be interested to take a few photos, just look and drive.

We have already discussed Batumi’s embankment near the port. It's time to make the path of several kilometers along the waterfront or  Rustaveli Avenue and see something else. If you did not read our previous article, here's a link to it.

After visiting Batumi’s boulevard, pay attention to the Sheraton hotel, this is a massive building. Personally on me, the building resembles some kind of colonial architecture. It seems that some colonists built here such a monolith to perpetuate their greatness. The building really seems huge against the background of the embankment and the Batumi boulevard.

A small park with broken lawns and a futuristic sculpture, personifying either a molecule, or a piece of a broken wall, adds even greater beauty to the city. The surrounding old buildings, including those from the Soviet era, did not stand out, one of them was lined with the same composite in the form of a molecule, a drop or a torn wall. When you look at this building at night, it seems that something futuristic before you and for a moment it becomes unclear what it is: a dwelling house, an observatory or just some miracle. The building looks victorious in the daylight, because the clothes hung from the balconies ruin the beauty of the design.

Further on Rustaveli we see a glass building of the Batumi University. At first glance, nothing special, but somehow captures the spirit, you think, can I become a student again? On the other hand, is it possible, when the sun shines outside the window, the sea and the beach?

Two glass houses - a hotel and a residential complex under the management of the Hilton, and a little further, on the opposite side of the building of the dolphinarium - there are super views.

McDonalds, Justice and other new buildings

Refueling cars station and McDonalds with hanging gardens, we have detailed about this place an article and video, read and see. You will understand why we believe that this place should be looked at.

There are two candles: the building of Justice and the business center of the Metro group, very close. The building of Justice reminds of a spiral cactus or other flower rising up to the sun. Opposite these buildings there is a wonderful Ukrainian restaurant and a lake with singing fountains and a laser show. Shows are held daily at 22-00, very beautiful.

Further on the right:

Opposite the Colosseum are three beautiful buildings of the Orbi Group, there are residential apartments, hotels and just accommodation for rent.

Further along the waterfront you will find: an aquapark, a business center, a large park and of course, the sea as always, it just does not leave you.

Have a good rest and more positive emotions.


If you do not want to walk for long distances, our cars for rent in Batumi are always for you. Order any cars, and maybe you need a cabriolet ???

Rent a car in Georgia cheaply, with a discount | Race.com.ge
Despite the high season, we offer a «happy hours» promotion for those who have already arrived in Georgia, but have not yet rented a car.
More